To understand our research and publications requires a certain amount of expertise. If you don’t have a background in psychology or neuroscience, the Academy will introduce some of the key concepts and methods we use in our work, hopefully in a way that’s accessible for a general audience. We will continue to add entries over time, so please come back regularly.

When is it possible to record from inside the human brain? 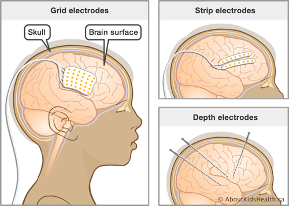 The goal of cognitive neuroscience is to understand how brain activity gives rise to cognition. However, researchers cannot measure activity inside the brain without performing neurosurgery, which would not be ethical or safe to do in healthy human volunteers. So, researchers are often limited to measuring brain activity indirectly from outside the head. However, in special situations, we do have the opportunity to directly record activity from a human brain. The procedure is known as intracranial recording, in which electrodes are placed inside of a hospital patient’s brain. These electrodes measure brain activity while the patient rests, sleeps, talks, or performs a behavioral experiment.

Why would someone undergo such an invasive procedure? These patients have intractable epilepsy, meaning that they have severe seizures which cannot be controlled by medications. Seizures often arise from one area of the brain, after which activity spreads and causes symptoms such as uncontrolled body movements or loss of consciousness. When all other medical treatments have failed, the best remaining option is sometimes to remove the part of the brain where seizures start.

To help determine which part of the brain to remove, neurosurgeons implant electrodes inside the patient’s brain and wait for seizures to happen. This can take 1-2 weeks, while the patient lies in their hospital bed. We as researchers visit the patients during this time and ask if they want to participate in experiments. They are often restless or bored, so are happy to be distracted with fun tasks. These epileptic patients provide an incredible and rare opportunity to directly measure human brain activity and allow us to ask new questions about the relationship between brain and behavior.

What can babies do better than adults?

It is tempting to think of babies as miniature adults in the making, but babies have several skills that we as adults have lost over the course of development. One striking example is that babies have broader perceptual abilities. This means that they are equipped to distinguish subtle differences that adults cannot perceive, such as in languages and faces.

Imagine that you visit the zoo with a 6-month-old baby. If right after visiting the monkey exhibit, you test the baby by showing her two monkey pictures side-by-side, one who was in the exhibit and the other who was not, she will tend to look more at the new monkey (indicating that she could tell them apart). But if you as an adult were given the same test, the two monkeys would look indistinguishable. What is really fascinating is that if you return to the zoo when this baby is one year old, she will now be just as bad at the monkey test as you are. She has not lost all face perception abilities, as she would still be able to tell two human zoo keepers apart. This phenomenon is known as “perceptual narrowing” because over development we become more specialized for things that we see more often in our environment (humans more than monkeys).

As another example of perceptual narrowing, at birth babies are able to learn any language on earth, such as Japanese, French, or both, depending on the speakers around them. However, as any adult knows, learning a new language later in life is extremely difficult. There are several potential reasons for this, but one is that you are no longer able to hear sounds in the new language that do not exist in your native language.

Perceptual narrowing shows us that early experiences play a critical role in building the mind. Our lab uses brain imaging to better understand this infant superpower.

What are the different kinds of memory?

We often think of memory in terms of remembering a birthday or forgetting a face, but it is actually a far broader concept. Put simply, memory refers to the many routes through which the past can influence our psychological present. It can span everything from how an athlete perfects their game, to why your mouth waters when you think of something appetizing, to how you’re able to draw meaning from reading these entries. Although sometimes faulty and incomplete, this collection of our skills, habits, and experiences profoundly determines who we are and how we interact with the world.

Psychologists and philosophers have spent centuries trying to categorize and scrutinize the different forms of memory using tools ranging from introspection to brain-damaged patients and neuroimaging. In our lab, we focus on how various kinds of memory influence other aspects of the mind, and on how such interactions are implemented in the brain. For example, our research considers why humans remember and forget specific events from the past, how we retain and manipulate information in our mind over a short delay, and how repeated patterns in the world influence what we perceive and how we act.

What can we learn from people with brain damage?

To be sure that a particular region of the brain is critical for some behavior, we need to know what happens when the brain region is no longer functioning. This kind of experiment has been performed in animals, where a part of the brain is inactivated. Such invasive experiments would be unethical in humans, however, and so we must rely on patients who develop brain damage from illness or trauma.

For example, much of what we initially learned about memory came from patient Henry Molaison, also known as H.M. He had a surgical procedure in which his hippocampus was removed to treat intractable epilepsy. After this surgery, he exhibited severe anterograde amnesia, that is, he was unable to create new memories. This provided compelling evidence that the hippocampus is critical for memory. This kind of surgery is no longer performed, but amnesia still occurs naturally as a result of viral encephalitis or other conditions. Patients with amnesia can appear normal in many ways. They still have intact language abilities — able to read, write, and converse. They can also have intact motor skills, such as riding a bike or playing an instrument. These preserved abilities tell us something about brain function too, namely that the damaged region is not critical for these behaviors.

What happens in a behavioral experiment? 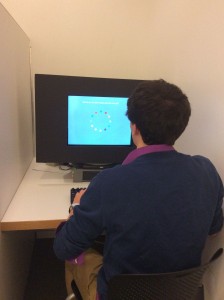 Psychology is full of interesting questions and interesting ways to test them. A lot of the research in our lab involves behavioral experiments. We call them “behavioral” because they examine human behavior as the primary measure of interest, as opposed to other methods used in the lab that study brain function or brain damage. There are lots of different tasks used in behavioral experiments and each one differs in terms of what you are asked to do.

When you arrive to participate in a behavioral experiment, you will be welcomed, given a consent form to read and sign, and instructed about what task(s) need to be completed. Most of our behavioral experiments are computer based. During these tasks, you watch something on a computer screen and use the keyboard or mouse to make responses. The tasks our lab uses vary widely, including asking you to report what images look like and testing your learning or memory for certain information. Each task addresses a different research question and offers a slightly different experience to participants. By studying behavior we can continue to gain rich insights into how the mind works.

How does brain imaging work? 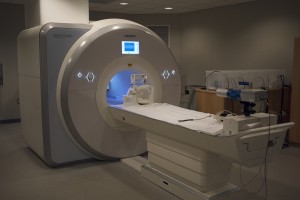 A lot of experiments in the lab use a tool called Magnetic Resonance Imaging (MRI). This powerful tool allows us to study how the human brain works. An MRI machine (or “scanner”) is essentially a huge and very strong magnet. This magnetic field acts on the atoms in the brain. In particular, it changes how those atoms rotate (or spin). When there’s not a magnetic field, all of the atoms spin in random directions. But in a uniform magnetic field, the atoms spin in the same direction. Then, during an MRI scan, we introduce brief bursts of radio waves (like a radio station) that knock the atoms out of alignment. We measure how many of the waves are resonated back out of the brain as the atoms realign.

To study brain activity and not just anatomy, we use a slight variant called functional MRI (fMRI). The process is basically the same, but we’re looking at a particular molecule, hemoglobin. This molecule transports oxygen through blood vessels in the brain. When an area of the brain is active, it requires a lot of oxygen as fuel, so hemoglobin with oxygen floods the area. When an area is inactive, there is proportionally less oxygenated hemoglobin. Fortunately for us, hemoglobin with and without oxygen has different magnetic properties. So we are able to infer where there has been neural activity.